Hillary Clinton will weigh in next week with her take about “What Happened” in the 2016 election. Takes have abounded over the last 10 months, but the data released by the Voter Study Group gives some simple answers, namely that Hillary did a worse job holding on to Obama’s voters than Trump did Romney’s. It’s not all that interesting of a story without the insanity of last year (and this one). The narrative of a big Clinton win that came out of the debates and Access Hollywood tape was wrong and we need a better way to craft and evaluate election narratives to prevent similar delusions in the future.

The Voter Study Group is unique among election studies in that they re-interviewed people who they surveyed in 2011 and 2012. The self-reporting of the 2012 vote should be more accurate since respondents answered in the moment, not four years later like in the Cooperative Congressional Election Study (CCES). The electorate can be broken down into the following groups:

Among those who voted in 2012 and 2016, Obama beat Romney 50.5% to 44.9% (slightly higher than Obama’s 51%–47% overall margin in 2012 but a certain percentage of the electorate has died since 2012 and older voters went more Romney than Obama). The gap between Hillary and Trump with these voters narrowed considerably. 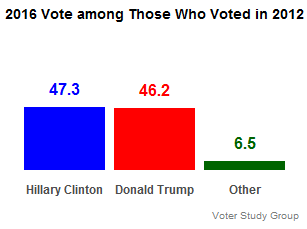 Dan Pfieffer articulated a familiar refrain many times on his podcast Keepin it 1600: “Who is the voter that voted for Obama and is voting for Trump or not voting?” He implied that these voters didn’t exist. Unfortunately, the 2012 Obama electorate is not synonymous with a progressive majority, and the “Never Trump” Republican didn’t exist outside of Republican consulting firms and DC green rooms. Hillary ultimately held on to smaller share of Obama voters (86.4%) than Trump did Romney voters (88.6%). She did not gain the Republican voters her campaign tried to woo.

An even bigger problem for Hillary was that among the Obama voters who voted against her, twice as many went to Trump than went to Jill Stein, Gary Johnson, Evan McMullin, and others on various state ballots. Among Romney voters who listened to what Mitt Romney said about Donald Trump, almost as many voted for a third party candidate as voted for Hillary. Those who went third party in 2012 split more to Trump than either Hillary or back to a third party candidate. Late campaign polls showed that this could happen, but this got lost in the Hillary win probability projections. If the “No Hillary” Obama voters split evenly between Trump and third party candidates, she could have won the four states she narrowly lost.

Another story that came out of 11/9 was the surge of new voters who came out for Trump. That didn’t happen either. Among 2016 voters who were eligible to vote in 2012 but didn’t, Trump and Hillary split almost evenly. 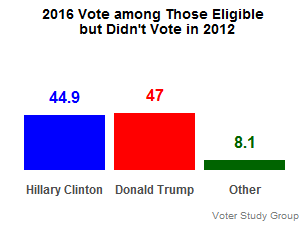 Among voters who were too young in 2012, Hillary won easily (from CCES since these voters were not eligible to participate in the Voter Study Group either). 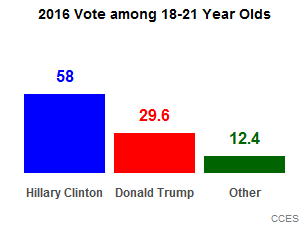 More of those who voted in 2012 but did not participate in 2016 went for Obama than for Romney. This fits in with anecdotal evidence of Democrats dropping out of the electorate (among those alive and not voting in 2016. Pollsters have enough trouble interviewing living people to even think about surveying the dead).

The Voter Study Group clearly shows why Hillary came up short and did not get a high enough of a share of the national vote to win 270+ Electoral Votes — she was deeply unpopular. Overall, 42% rated her favorably while 56% viewed her unfavorably. Trump got a similar rating (44% favorable, 53% unfavorable) but was not any more unpopular than Hillary nationally despite running an insane campaign. Among those who voted third party in 2012 or 2016, or voted Obama-Trump or Romney-Clinton, Hillary was easily the most unpopular national politician, far surpassing Trump:

While he didn’t face the rigor of a national general election campaign and a billion dollars in Koch Brothers-funded attack ads, Bernie was far more liked than Hillary, Obama, or any leading Republican. Hence the song:

Lots of factors went into Hillary’s defeat. No single factor stands out. The race was always going to be close. Trump was going to hold almost all of Mitt Romney’s voters and Hillary’s unpopularity should have lowered expectations for her throughout the campaign among her supporters and in the media. On a brighter note, Trump in 2020 faces a large share of new young voters opposing him that will only grow as more of these voters participate and new young voters enter the process while elderly white voters who backed Trump “age out” of the electorate.