Last week, after being roasted in a town hall with survivors and victims of the mass shooting in Parkland Florida, Senator Marco Rubio took to Twitter to denounce an assault weapons ban as “outside the mainstream.”

Banning all semi-auto weapons may have been popular with the audience at #CNNTownHall, but it is a position well outside the mainstream https://t.co/18rMDwEfGs

For someone who has spent a small fortune on polling in his political life, Senator Rubio certainly doesn’t know how to read one. Just yesterday, Florida Atlantic University released a poll showing that 69% of Floridians want a ban on assault rifles. Many other pollsters have found similar results nationally.

While we can expect support for common sense gun laws would spike after a horrific mass shooting, it’s instructive to go back to a neutral point in recent history to get a calmer read. The Cooperative Congressional Election Study (CCES) does a massive poll during and after federal elections. In 2016, they asked the following:

On the issue of gun regulation, do you support or oppose each of the following proposals? Ban assault rifles

Among the 44,169 registered votes surveyed who voted in the general election, 63% favor banning assault rifles. This support is deep among many groups in the electorate. 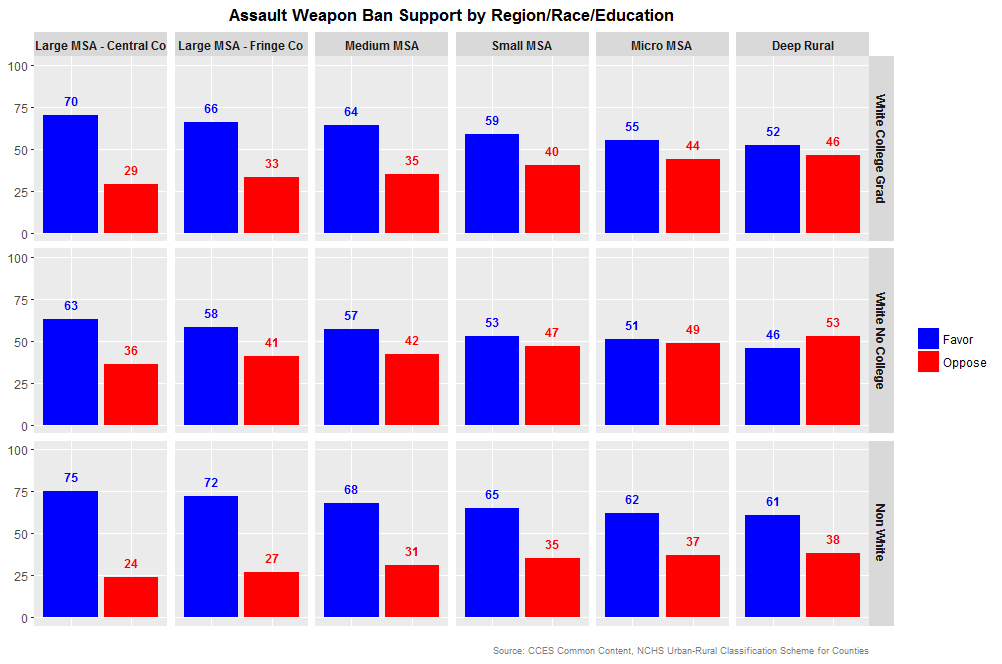 Looking at the electorate by race, education, and county type, all voters in large urban counties overwhelmingly support the assault weapons ban. People of color in every type of county — urban, rural, and everywhere in between — support the assault weapons ban. Among white voters, college graduates in all type of county support it. Non college white voters in small towns split and rural areas narrowly oppose it. 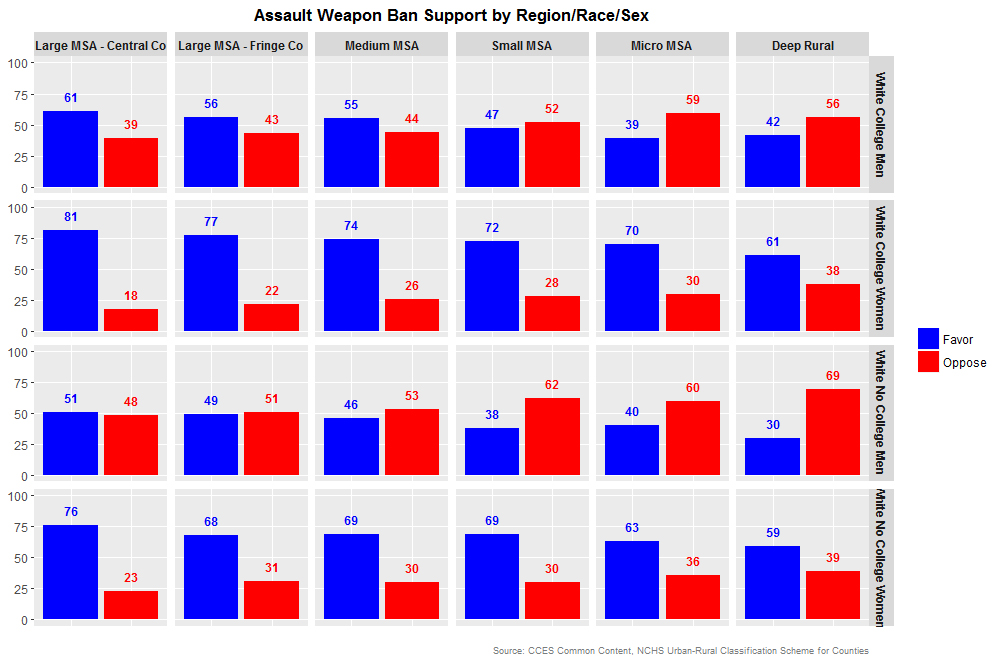 In total, white women, people of color, and white college men support a ban. That’s the very definition of “mainstream.” While “rural voters” are the excuse members of Congress and pundits give for why any laws to deal with gun violence can’t pass, rural white male voters represent a small portion of the population and don’t have enough members in Congress to thwart a majority. Don’t blame “rural voters” for inaction. Blame politicians who ignore the will of the vast majority of their electorate. 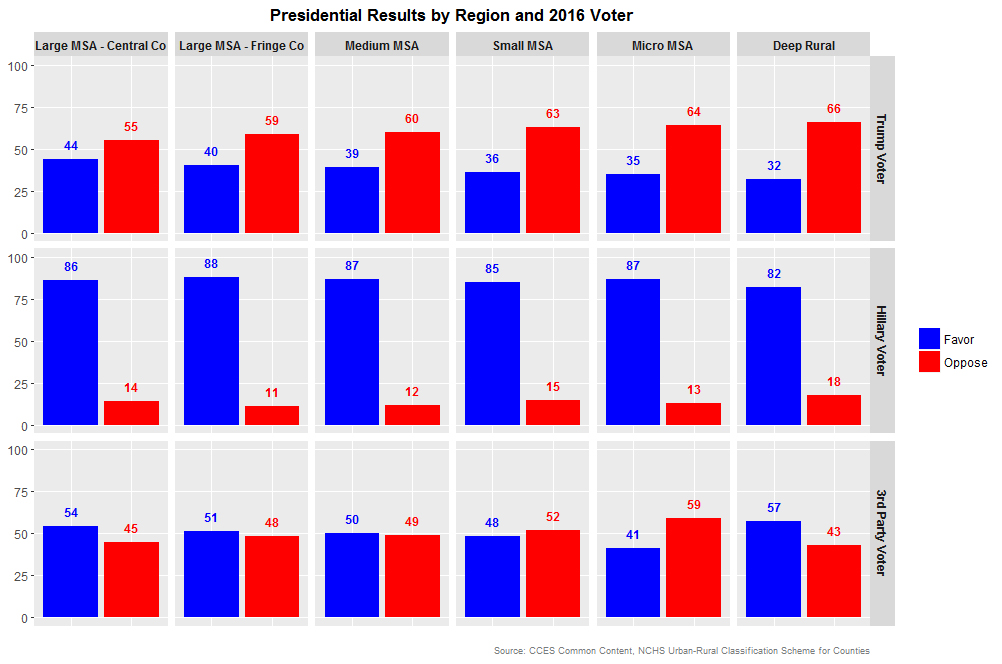 Even though Trump voter in every region oppose the assault weapons ban, a significant share in urban areas, over 40%, support it. Big city Trump voters like this guy: 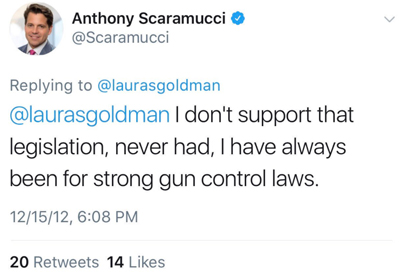 As far as the “rural” areas, a third or more of Trump voters in rural and small town counties favor the assault weapons ban. These voters might be out of the “mainstream” of the communities in which they live, but not with voters in the rest of the country. More Hillary voters support the ban than Trump voters oppose it. More than 80% of Hillary Clinton voters in every region favor this ban. Democrats will not “abandon” the party if members vote for a ban, even Democrats outside of cities. Third party voters are largely split — unsurprising given the frothy mix of libertarian Gary Johnson voters and far-left Jill Stein supporters.

Support for the Assault Weapons Ban by State 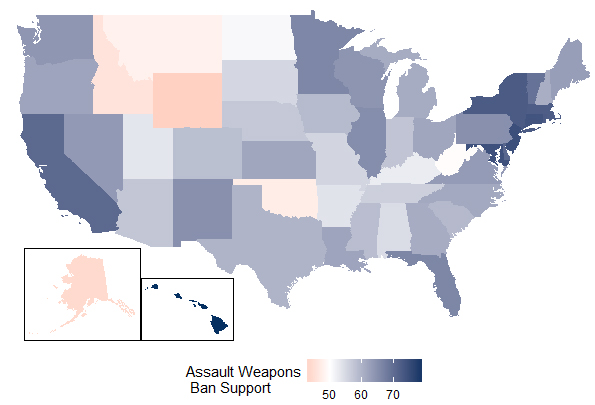 Looking at individual states, banning assault weapons is a majority position in every state except Alaska, Idaho, Montana, Oklahoma, West Virginia, and Wyoming. We calculate this using the CCES data and a technique called Multi-Level Regression and Poststratification (MRP). This allows us to estimate support at the state and congressional district level despite small sample sizes. This technique is widely used with CCES data. The datasets and R code used can be found here.

If members of the House voted for the majority position on an assault weapons ban in their district, it would pass 399 to 36. Democrats would vote 192 to 2 and Republicans 207 to 34.

The vast majority of districts (196) that voted for Trump support the assault weapons ban. Only 34 oppose it. Voters in only one district held by a Democrat (AZ-01, Tom O’Halleran) and won by Trump opposes the ban. The 23rd district in Texas, represented by Republican Will Hurd, was won by Hillary but voters there oppose the ban.

A substantial number of districts represented by Republicans but voted Hillary strongly support the assault weapons ban. These include:

Many of these members are retiring or are prime targets for Democrats in 2018. Democrats running in these districts have nothing to fear from supporting an assault weapons ban.

In a normal democracy, where representatives vote the will of their voters, the AR-15 and other weapons would no longer be legal to buy. However, we don’t live in a normal democracy. Just don’t let anyone tell you that your belief that assault weapons should be banned is out of the mainstream. They are misinformed or are lying to you. All this data backs that up.