Like the proverbial broken clock, the New York Times is right today. The 2016 exit polls did lead us to misinterpret the 2016 election. Voters were less educated and older than what the exit polls told us. White non-college voters do make up a greater share of the Democratic electorate than is commonly reported. The article goes into great depth on the methodological problems with exit polls that we should just all accept so we can move on from using exits as reliable guideposts in the future. Unfortunately, this fuller understanding of the Democratic coalition should not lead us into pursuing messaging and issues strategies that will break apart that coalition or dampen the considerable enthusiasm building for the 2018 and 2020 elections.

After presenting the data, Thomas Edsall quotes the academic William Galston about what the Democrats should do as a result:

Galston, writing in the March 16 Wall Street Journal, argues that Democrats need to moderate their stand on immigration in order to win over white noncollege voters.

“No issue has done more than immigration to feed populism, and finding a sustainable compromise would drain much of the bile from today’s politics,” Galston writes. He continues:

Defenders of liberal democracy should acknowledge that controlling borders is a legitimate exercise of sovereignty, and that the appropriate number and type of immigrants is a legitimate subject for debate. Denouncing citizens concerned about immigration as bigots ameliorates neither the substance nor the politics of the problem. There’s nothing illiberal about the view that too many immigrants stress a country’s capacity to absorb them, so that a reduction or even a pause may be in order.

First off, voters really hate Trump’s immigration policies. In a February CNN poll, 36% approved of them while 60% disapproved, identical to his overall approval rating in that poll (35% approve-58% disapprove). A substantial majority (60%) oppose his signature proposal — the “Big Beautiful See-Through Wall.” Only 38% approve of this, less than the percentage of people who voted for him in 2016. On the other hand, 80% support allowing undocumented immigrants who were brought to the U.S. as children to remain in the United States and eventually apply for citizenship.

You know what else divides Americans? Partisan identification. It’s even more predictive of vote than race and educational attainment.

Looking at policy preferences by race and education doesn’t mean much unless it is also analyzed by party. If white non-college Democrats agree more with Republicans, both college and non-college, than white college Democrats, the party should look to “moderate” on core civil and human rights issues. They don’t however. The chart below shows results on a variety of issue questions from the Cooperative Congressional Election Study (CCES)in 2016. The chart is kind of messy but it breaks out five groups: 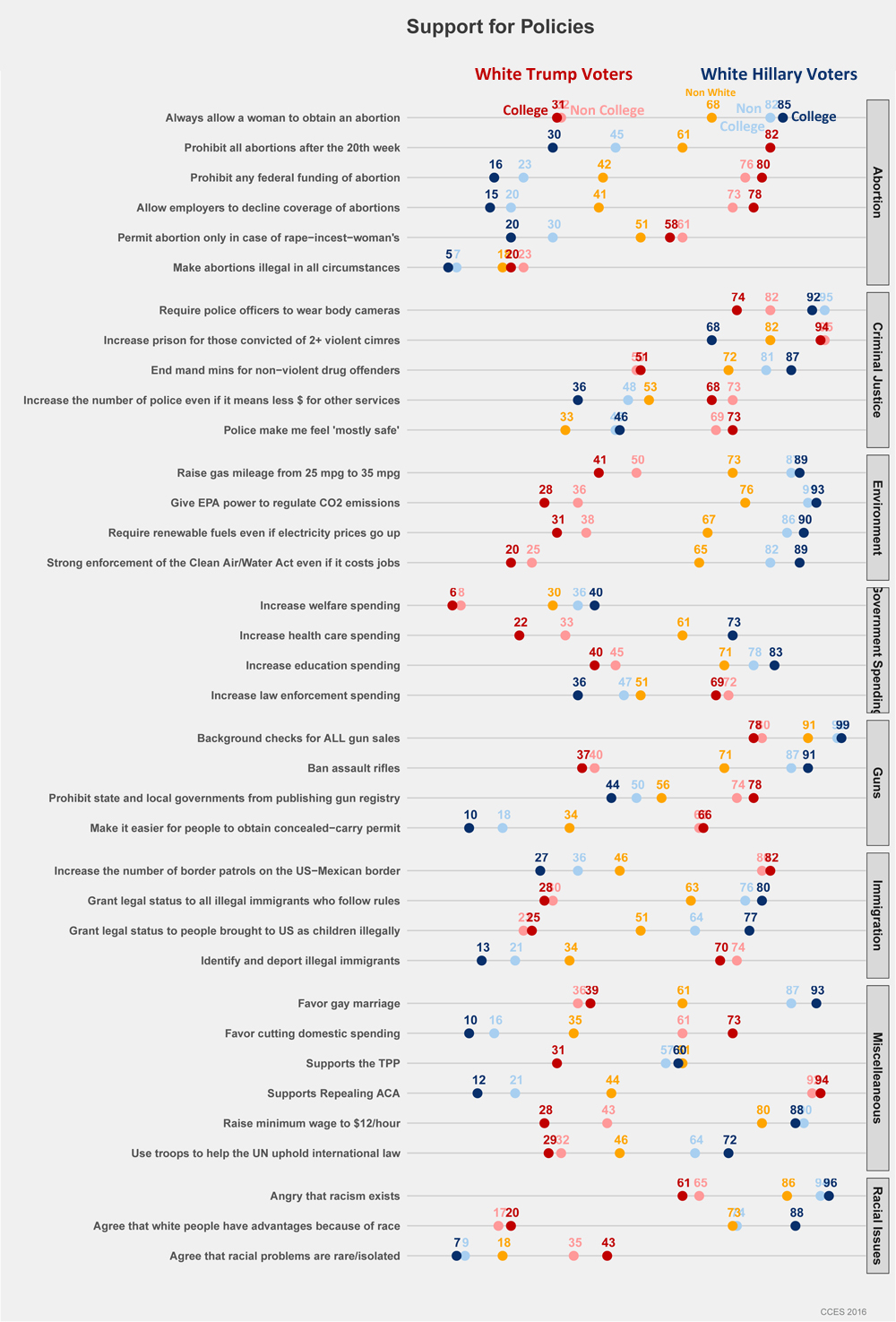 On every measure, Hillary voters — both college and non-college — agree with each other and not with Trump voters. This covers a wide variety of issues: abortion, criminal justice, environment, government spending, guns, immigration, racial issues, health care, and others.

There is no way around it — if Democrats hope to be competitive in Ohio and similar states in 2020, they must do the hard thing: find a way to reach hearts and minds among white non-college voters.

Well, they have reached the hearts and minds of some white non-college voters. Also, 54% of the electorate did not vote for Trump. By “moderating” on immigration, particularly by supporting draconian policies like the “Wall” or breaking up families, Democrats risk turning off the non-college white Hillary voters along with depressing turnout with white college Hillary voters and non-whites. And for what gain? The white non college Trump voters are vastly more conservative on issues other than immigration and would not vote for Democrats anyway. Unless you can prove that by changing policy positions, values, and issue emphasis you will gain more votes than you will lose, forget about doing it. Just saying that there are more white non-college voters in the electorate than previously thought does not solve this equation.

Much is made of the Obama-Trump voter but they are vastly more conservative than the Obama-3rd party voter: 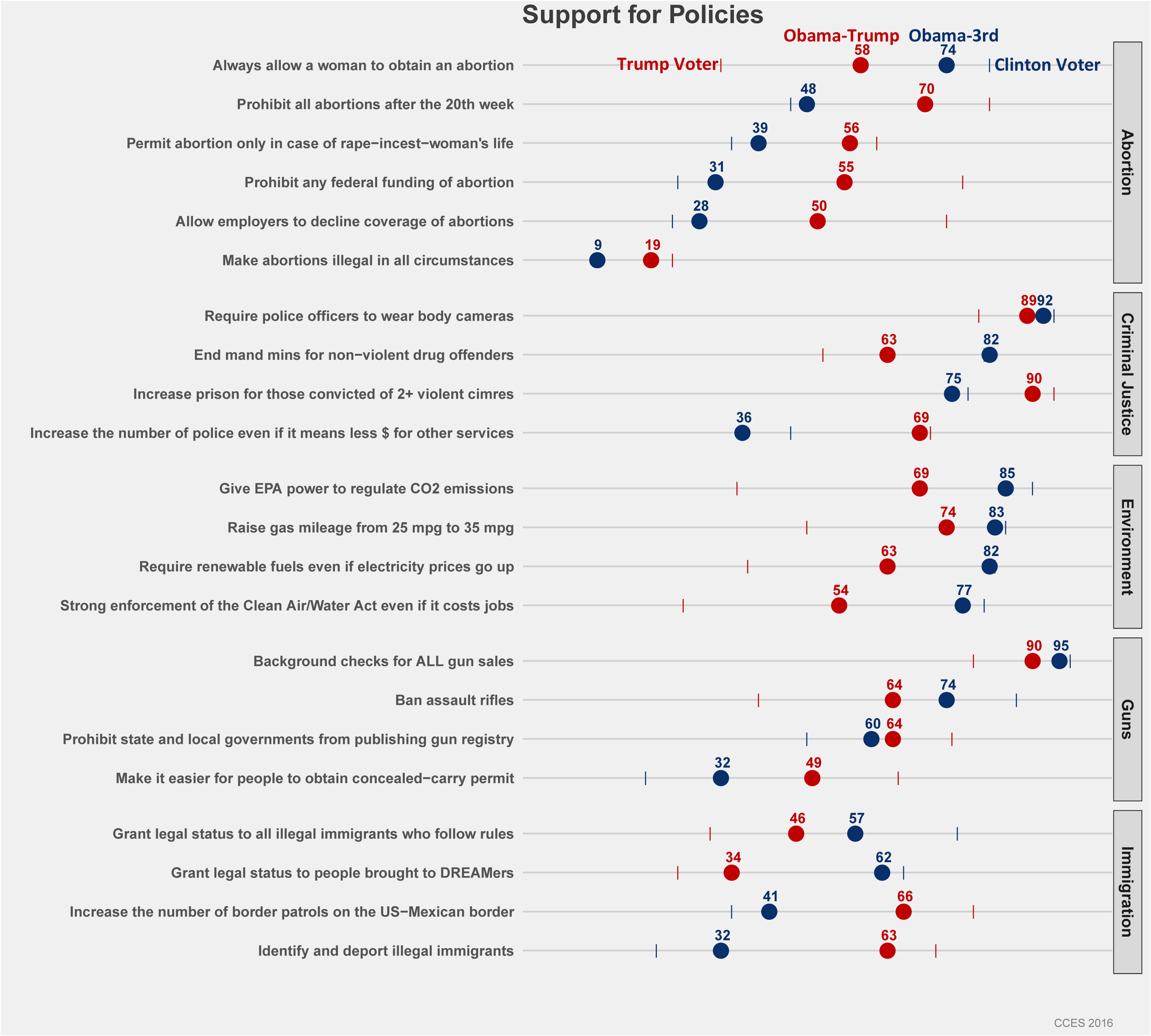 This is not to suggest that Democrats abandon the white non college voter. They should just not change policy preferences on core issues involving civil and human rights. The actions by Trump’s Immigration and Customs Enforcement (ICE) agents are abominable.

A vast majority of voters support immigration reform that provides a pathway to citizenship for all illegal immigrants and oppose Trump’s wall. They also believe immigrants strengthen the country through their hard work and talents (65%) while a small minority (29%) believe immigrants burden the country by taking jobs, housing, and health care. Democrats have nothing to gain by turning against their own coalition no matter how many people in Washington and the media say they should. They should just nominate better candidates.