Since we have to wait 138 days to find out the composition of the 115th Congress, polls and takezzzzz will have to suffice. The “Blue Wave” is either “alive and well” or “crashing and burning.” Panic abounds when the Democratic generic House vote margin expands or shrinks. Currently, you can win a dollar by betting 62 cents on the Democrats to win the U.S. House and make a nice profit if you lay some cash down on the Republicans. So, are the Democrats going to win or not? It’s complicated.

In 2014, the Democrats did abominably. They lost 13 seats and fell to a decades low 188 members. Republicans captured 247 districts for a 59 seat advantage. Nationally, in the exit poll, Democrats lost by six points (47% to 53%). Given the historically low ratings of Donald Trump, Democrats should expect to do better than in 2014. However, looking at the current share Democrats receive in the daily Civiqs survey, Democrats are almost exactly where they were when they got croaked.

Democrats get over 90% from their partisans. Almost no Republican crosses over. Democrats do better with Independent women than men. The party has not changed any minds since 2014. For this distribution to produce a majority in the House, Democrats need to drive up turnout with their supporters and hope the Republicans fail to catch up in base mobilization. Since hope isn’t a plan, Democrats need to persuade Independents.

Of course this is just comparing Democratic vote share, not the margin over the Republicans. However, I have been part of and observed too many campaigns where the Democrat finishes with the same percentage they got in the last poll. Although this wasn’t a problem in my polls in 2016, polling has gotten worse at capturing the views of white rural and non college educated voters. In Kentucky in 2015, Democratic pollsters went through their pre-election polls for Governor (Democrat Jack Conway led by about six points in pre-election polls and lose to Republican Matt Bevin by nine points) and determined that most of the undecided voters broke to the GOP (no link, I heard this in a briefing).

This all occurred when Barack Obama was President. He’s not anymore, so let’s look at the Republicans. The Republicans are far off from their 2014 stomping. They trail by five to six points among both Republican and Democrats. They do worse with Independents — 19 to 20 points off. Not good.

Whichever side can win over Independents will control the House. Republicans currently lead with Independent men:

While Democrats lead with Independent women:

Independents really don’t like either party. Independent men are favorable towards Trump while women are not. 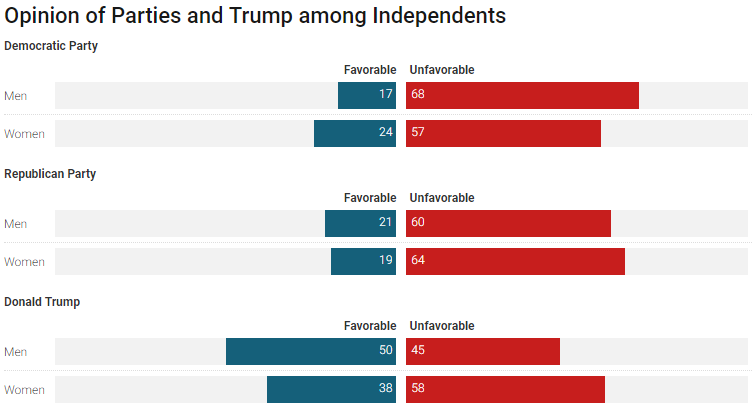 Civiqs does not allow me to refine these results in order to isolate Independents who are undecided in the race for the U.S. House or support another party. My guess is that these 20% are even more unfavorable towards both parties and the President.

The election will ultimately swing on which party these voters hate more on Election Day. Stay tuned!